The Tuan Chau Ha Noi tourism resort, which will be built near Thay Pagoda in Sai Son Commune, Quoc Oai District, includes a man-made beach along with other facilities.

Son said that his company is installing the system to make waves, white sand and salt water for the beach which is slated for operation next month.

The beach will have waves of 1.2-1.5m height and can accommodate 3,500 - 4,000 people. It will also include a water puppet stage based on traditional northern villages.

The area can host water puppet performances and will serve traditional food.

Top 5 Tips for a Safe Beach Holiday in Halong Bay 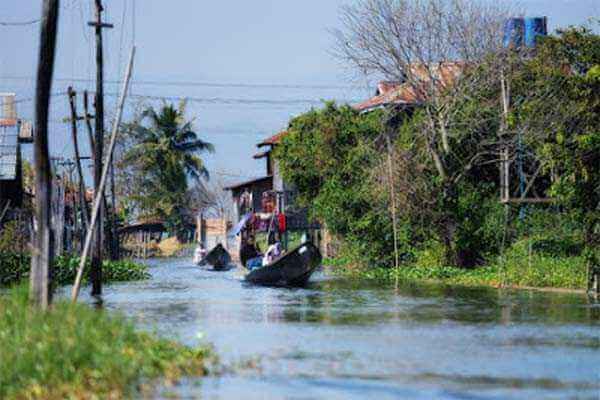 Top 5 Places to Visit in Myanmar to First-time Travelers

“Please find enclosed the questionnaire filled in and commented. Sorry for the delay. I would like to thank you for all the efforts you have done, we really appreciate your support regarding the organization of our trip. All members of my small group are really satisfied and keep many pleasant memories...”

“We had an absolutely fantastic time! I think the absolute best tour we’ve ever been on. You made everything incredibly easy and smooth for us and we really appreciate everyone’s responsiveness. The guides were great and young and fun and energetic which is exactly what we needed. Few random thoughts: Really...”

“What can I say about this tour operator, but FANTASTIC!! From the time it took us to decide where and when to tour up until the actual tour Ms. Phuong kept us so well informed with great suggestions and quick responses to all questions mailed to her (and there were many). Nothing was too much trouble...”

“I wanted to praise JTA Tours for they commendable services. From trip planning to services on the our Vietnam holiday, it was meticulously planned. A show of appreciation to Ms Nhung for your outstanding service, I really appreciated all your hard work as the trip turned out really really well. It was...”

“We are returning from a journey for 17 days in Laos, Cambodia, and Vietnam which we had entrusted the organization, JTA Tours. Knowing that we wanted to avoid the places invaded by too many tourists, they have prepared a dream itinerary with very good hotels and very competent guides. We were well...”

“With 3 weeks to discover Vietnam, everyone was surprised that we had seen so much. No double thanks to the travel agency that had organized everything from the smallest detail. The price was very reasonable. During the trip, we would have revised some routes, days to take the time for visit other...”

“Quite frankly, we were bowled over from start to finish, the itinerary is jam-packed but it was an entirely stress free trip. JTA Tours ensured all airport meetings and transfers were seamless, private travel arrangements and guides were of a high standard. We began our trip in Siem Reap, and travelled...”

“We corresponded extensively before booking the trip and were given lots of suggestions and alternatives to this tailor made holiday. We started in Hanoi where we were met at the airport and taken to our Hotel as a tour guide. The guides have a good grasp of English and extensive knowledge of their country....”

“Hello Nguyen, Yes we are all settled back home in Australia now. Thank you so much for organising this tour for us. We were very well looked after. While all the accommodation in Vietnam was really good, I wouldn’t recommend the Juliana hotel in Phnom Penh, it was too far away to walk to...”

“We have had great experience with JTA Tours. When we had private tour: Highlights Of Vietnam Tour - 11 Day arranged by Ms. Phuong. We had a long e-mail correspondence prior to it with her, she being highly professional and helpful. The tour itself was exactly what we wanted, hotels were to our satisfaction,...”

“Booked this tour in Myanmar through internet. Must admit when first booked we were a little worried, but from the moment we arrived in Yangon everything ran smoothly with JTA Tours. Tour guides in all areas were very helpful and informative especially "Khin Thet Mar" our guide in Bagan. All hotels...”

“Our family of 4 people just finished a 2 weeks holiday from vietnam to cambodia, we honestly highly valuate the professional organization & meticulous cares of JTA Tours. From the beginning, we emailed to them to customize a suitable trip with a combination between sightseeing & beach relaxation...”

“We had an absolutely amazing time in Myanmar, thanks to JTA Tours and our Guide Aung Aung, the sites we saw were incredible. We want to thank Aung Aung for being so good to us and making this trip worth every minute we were on it. For his expertise in Myanmar history and for always doing his best in...”

“The tour was fantastic. I thoroughly enjoyed the walking routes each day, with the mountain from Sapa, the walk at Lao Chai & Ta Van, and the day walk at Hoian/trip to Halong bay my personal highlights. The first nights meal at the winery, and the last 2 at the family at Mekong were amazing. Our...”

“This agency was recommended by my friend - Mr Jito and they really provide good service. Mr Thang helped us all the way from the moment we touch down the airport until the last day we go home, he never disappoint us and we really enjoy very much. all the itinerary they planed for us never go wrong. this...”

“Many thanks Jito for your kind support! My and husband's dream to visit Ha Long Bay was finally fulfilled. Tham from JTA Tours provided a good deal and clear itinerary during for visit Ha Long Bay. It was a last minute deal since we were already arrived in Hanoi and seems most good cruise was no longer...”

“Hi Suharjito, we are now fine in Indinesia. Thanks so much for amazing trip to the north of Vietnam including Hanoi, Halong&amp; Ninh Binh also. Excellent experience and very high-level service. JTA Tours took amazing care of us from the moment we landed. Were very open for changes and for every...”

“Dear Thang, we have now returned back to Australia and the chores of work! – We have very pleasant memories of the sights, sounds, food and people of Vietnam….. We shall treasure for a lifetime I would like to take this opportunity on behalf of our group to say we had a wonderful time – the...”

“Hi Thang, I do apologize that it has take me so long to email you and thank you for yet another super lot of organization on your part which helped to make our time in Vietnam so enjoyable. We really do appreciate so much your professional and reliable services which make our job in taking our small...”

““Our trip to Vietnam and Cambodia was superbly organised by JTA Tours. We were met promptly and efficiently by very friendly and helpful guides at each stage of our holiday. Our hotel in Seam Reap, Hoian & Hanoi was lovely. The trips were well organised and in formative. The floating villages were...”

““We wanted to write to you personally to let you know how much we enjoyed our holiday in Myanmar and to thank you for organizing this memorable trip. We had such an amazing time discovering your diverse and beautiful country, it's people and of course the strange food. We found your tour was...”

“Hi Mr. Thang, “BEST SELLING VIETNAM FAMILY TOUR - 17 DAYS" with JTA Tours, just a quick note to say thank you for an amazing experience! Our participants commented on how wonderfully it was organized and we received lots of positive feedback (along with a few suggestions but it was overwhelmingly...”

“I search into Goggle for Vietnam & Cambodia tours, I contacted approximately 5 different companies, it was my contact with Ms Na Na that made me select your agency. She was superb in every way and a pleasure to work with, she had excellent suggestion for myself and three Granddaughters. She is truly...”

“Hi, thank you for your note. I would also like to make special mention of two of your staff – Mr Thang who prepared the tour for us and the second tour guide that we had, who I only knew as Phuong (he was our guide in both Dalat and Nha Trang). The service we received from both of these people was...”

“Hi Mr. Thang, We are doing fine. We want to let you know that our guide Mr Nam was excellent. He saw to all of our needs and had us back to our hotel on time for our dinner with or tour group. I would highly recommend Mr Nam to anyone that needed a private guide while visiting Vietnam. And, thank...”

Thailand vape ban: Travellers unaware they could face up to 10 years in prison for using e cigarettes

Copyrights 2016-17. All rights reserved by: JTA Tours - Your Excellent Trip, We Care!